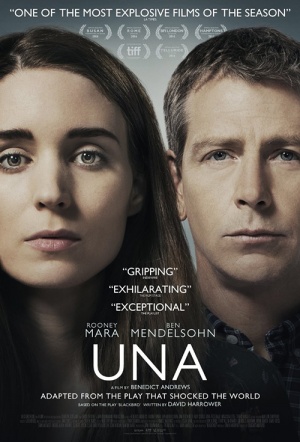 Oscar nominee Rooney Mara (Carol) tracks down the man who sexually abused her as a teen in this psychological revenge thriller co-starring Ben Mendelsohn (Rogue One: A Star Wars Story).

"Rooney Mara is the titular Una, and Ben Mendelsohn is Ray, the neighbour who sexually assaulted her when she was 13. A decade later, Una tracks Ray down in search of answers - but she doesn't find the ones she's searching for. Uncomfortable with the path she's set out on, but unable to change course, Una must face the fact that Ray is now, in many ways, a different person from the man who abused her. But he still refuses to accept responsibility, and her anger has not abated." (Toronto International Film Festival)

(Mara and Mendelsohn's) performances are tightly focused and unflinching; too bad they are surrounded by a lot of heavy-handed... cinematic showing off.

The Globe and Mail

Una is a film of seismic shocks built to make an audience squirm. Mission accomplished.

Ben Mendelsohn and Rooney Mara play a pedophile and his target in this edgy adaptation of the David Harrower play.

Una is a character and a story that fails to engage and the argument for its existence as a film is a sadly unsuccessful one.

A confronting, compelling drama fuelled by the lack of easy answers. It's so tense at points, you might forget to breath.

The play has been superbly opened out, and the prowling cinematography of Thimios Bakatakis (Attenberg, The Lobster) and Fiona Crombie's cheerless sets combine to sustain an oppressive mood throughout.

The film has a different though no less riveting intensity, thanks to Rooney Mara's emotionally naked performance in the title role, and unflinching support from Ben Mendelsohn.

The ebb and flow of power throughout this film is part of its brilliant dynamic.

Every time the film could go for the expected, it turns on a dime. Not all of these twists work, but it keeps us on our toes, which makes the situation feel real because it's working against what we want to happen.