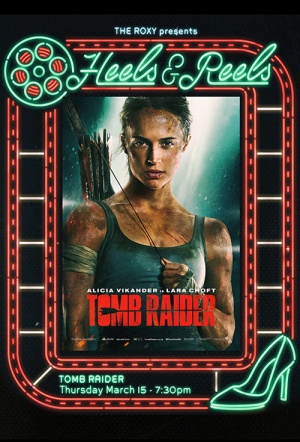 In the mood for an epic action packed adventure? Then grab your crew and look no further... Heels & Reels is back with a BANG this March as we're showcasing Tomb Raider. Alicia Vikander stars as our heroine Lara Croft; the fiercely independent daughter of a missing adventurer.

In this American-action-adventure film, Lara goes to complete her father's research and uncover ancient secrets capable of clearing her name. She must push herself beyond her limits when she finds herself on the island where her father disappeared.

Whether you're a fantasy-fiction fan, a action-adventure addict or simply in need of a fun night out with your pals, then this is the film for you!

It'll be a night of heroes and heroines, so grab a bunch of friends, get cosplaying, and come out for an evening of fun!

There will be a prize for best costume, along with amazing treats from our wonderful sponsors - L'affare, Blackmore & Best Gallery, Bohemein Fresh Chocolates, Haylo, Headstart Hair and Shut Up and Dance - as well as a themed welcome cocktail and delectable canapes!