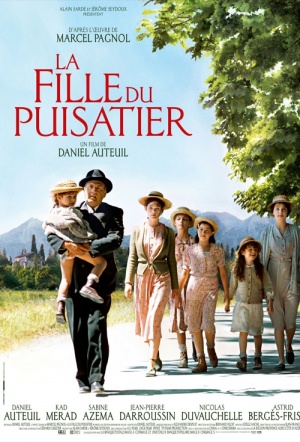 In this French romantic drama the eldest daughter of a well-digger returns home from Paris when the first shots of World War I are fired. When she falls pregnant to a fighter pilot from a wealthy family her father is torn between his sense of honour and love for his daughter as a rift between the two families develops.

On the cusp of the First World War in France, 18-year-old Patricia (Astrid Berges-Frisbey) meets handsome young Jacques (Nicolas Duvauchelle) - a fighter pilot. But when Jacques is suddenly called to the front after just two romantic rendezvous, Patricia finds herself pregnant and in the middle of a rift between her father (Auteuil) and Jacques’ upper-class parents (Jean-Pierre Darroussin and Sabine Azéma). The Mazels refuse to acknowledge their grandchild, accusing Patricia of blackmail. But when Jacques is reported missing, will the bond of family triumph over class division?

Decidedly, almost defiantly, old-fashioned, but not necessarily in a bad way.

There's nothing rushed or crowded about this film, just a quiet story carefully told.

A pastoral wrapped in gauze, sunlight and sentimentality.

The humanist spirit of Gallic novelist-director Marcel Pagnol is alive and well in the old-fashionedly sincere The Well-Digger's Daughter...

The ending might be a little sugary for some but the film's bedrock-solid acting and airtight script make it a story to fall into.

A polished, finely acted tale of love and class in the south of France.

Fans of Manon Des Sources will revel in Auteuil's performance. He proves he's a dab hand behind the camera, too, with a touching romantic drama.