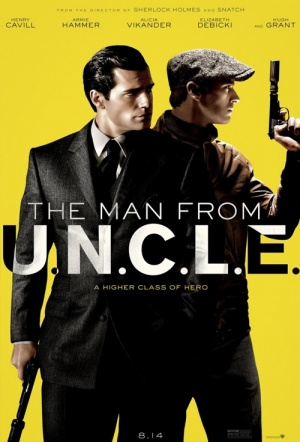 Set against the backdrop of the early 1960s, at the height of the Cold War, centers on CIA agent Napoleon Solo and KGB agent Illya Kuryakin. Forced to put aside longstanding hostilities, the two team up on a joint mission to stop a mysterious international criminal organisation, which is bent on destabilising the fragile balance of power through the proliferation of nuclear weapons and technology. The duo's only lead is the daughter of a vanished German scientist, who is the key to infiltrating the criminal organisation...

So this is what Guy Ritchie’s career looks like now. Coming off back-to-back juiced-up Sherlock Holmes reboots, Ritchie continues to carve a little niche for himself as the go-to-hack for resurrecting creaky properties for the ADD-afflicted modern age with this update of ‘60s spy show The Man from U.N.C.L.E. (next up: King Arthur).

While it lacks a memorable villain, and the central pairing fizzes but never sparks, the film gets by on its vintage charm and a third act upswing - and, for all its messiness, it'd be a shame not to see Solo and Kuryakin rutting horns again.

Has enough style and smarts to make it an amusingly louche summer movie: a cultivated mix of action and wit, suits and cities.

Ritchie makes the kind of enjoyably disreputable movies that are fun to watch until they're not.

An enjoyably daft, but stylish night out.

It all winds up feeling hollow and even slightly oppressive, an enforced sense of fun jabbed within quotation marks. It aims for a silky lightness of touch but lands like a dropped slab of concrete.

It's not bad but not quite good enough either.

Cavill and Hammer are made for each other, but the film can’t always find the pyrotechnics to match their chemistry.