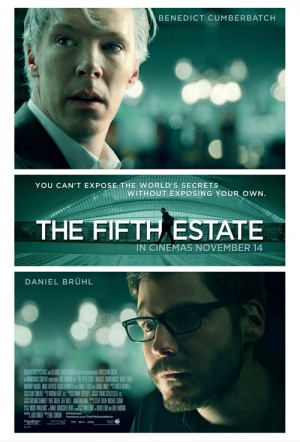 Benedict Cumberbatch is WikiLeaks founder Julian Assange in this dramatised retelling of the heady, early days of the whistleblowing website - culminating in the release of a series of controversial and history changing information leaks. The publicity of the leak brought overnight fame to its principal architects and transformed the flow of information to news media. Based on the books written by Assange's colleague Daniel Domscheit-Berg (Daniel Brühl, Rush) and Guardian journalists David Leigh and Luke Harding.

Assange and Domscheit-Berg began things as an underground watchdog of the privileged and powerful. On a shoestring, they create a platform that allows whistleblowers to anonymously leak covert data, shining a light on the dark recesses of government secrets and corporate crimes. They are soon breaking more hard news than the world’s media outlets combined. But when Assange and Berg gain access to the biggest trove of confidential intelligence documents in U.S. history, they battle each other and a defining question of our time: what are the costs of keeping secrets in a free society?

The problem with true stories is that they always feel messy, imperfect, unfinished. For its first hour, Bill Condon's primer on WikiLeaks founder Julian Assange is perfectly serviceable – if far from subtle, like reading a Wikipedia page on CAPS LOCK.

Primarily hobbles itself by trying to cram in more context-needy material than any single drama should have to bear.

With a riveting portrayal by Cumberbatch at its heart, The Fifth Estate tells its story grippingly - but finally leaves us none the wiser.

Brühl, meanwhile, is saddled with the unenviable task of being this hollow movie’s slow-dawning voice of reason: His climactic conversation with newspaper editor David Thewlis (never worse) is one of the most embarrassingly didactic Way We Live Now™ summations ever filmed.

There is something a little too pat about this narrative, and about the more-in-sorrow-than-in-anger spirit in which it is offered.

This is highly competent catnip for the watercooler crowd.

Condon seems to hope energetic staging and furrowed brows will compensate for a script that’s essentially an exchange of halfhearted arguments.

A well-acted but uneven take on recent events that feels strangely superfluous.

Cumberbatch's Julian Assange is the highlight of a sometimes ordinary-feeling film.

Disappointingly dull account of a tale desperately in need of a sharper screenplay and some directorial vim. Might as well wait for the Blu-ray, Jules.