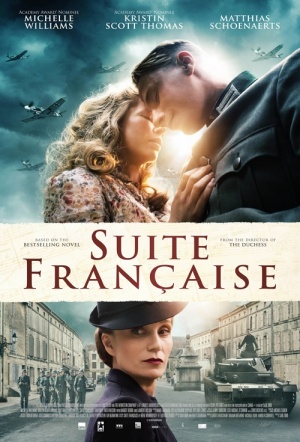 Michelle Williams (My Week with Marilyn), Kristin Scott Thomas (The Invisible Woman) and Matthias Schoenaerts (Rust and Bone) lead this WWII drama about a taboo romance between a French villager and a German soldier in Nazi-occupied France. From the director of The Duchess.

While awaiting news of her POW husband, Lucile (Williams) and her controlling mother-in-law (Thomas) remain stationary in their home as Parisian refugees and German soldiers populate their village. When the two are introduced to German officer Bruno von Falk (Schoenaerts), they initially ignore any unnecessary contact with him. But Lucile and Bruno share a similar state of mind which draws them together, one that Madame Angellier does not approve of…

Clumsy storytelling decisions {...} can't entirely get in the way of a good story...

A much-admired text is respectfully brought to the screen in a film that nonetheless struggles under the burden of its war movie clichés.

A wide array of characters come at the expense of depth - but it's a knotty, thoughtful piece of work nonetheless.

Has sturdy production values, a tony cast and middlebrow tastefulness up the wazoo, but barely any soul, bite or genuine passion.