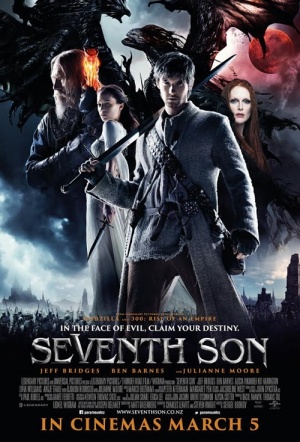 Fantasy film following a mystical knight (Jeff Bridges) and his 14-year-old apprentice (Ben Barnes) as they prepare to battle the malevolently powerful witch Mother Malkin (Julianne Moore). Based on the first book in the Wardstone Chronicles series of young adult novels by Joseph Delaney.

In an ancient time, an evil is about to be unleashed that will reignite the war between the forces of the supernatural and humankind. Master Gregory (Bridges) imprisoned Mother Malkin centuries earlier, now she has escaped and is seeking vengeance. Summoning followers of every incarnation, the witch is preparing to unleash her terrible wrath on an unsuspecting world. Gregory, about to come face to face with the evil he feared would return, trains his new apprentice to fight the dark magic.

Amounts to nothing short of a creative miscarriage.

Overstuffed, but swift and unpretentious...

I know it's early, but "Seventh Son" may actually be the worst movie of the year. It will most certainly be a contender.

Certainly watchable but far from memorable...

Ends up being a movie about walking, interrupted occasionally by a battle against a mythological monster.

Brisk and unpretentious, though the fact that these two qualities can be considered remarkable probably says more about the state of modern genre filmmaking than it does about the movie itself.