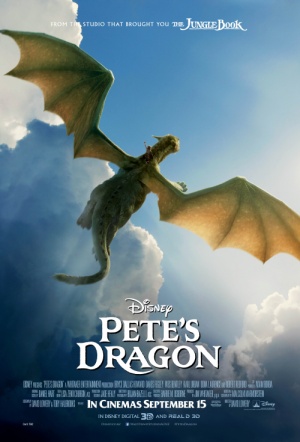 Disney update their animated family film (1977), with this live action fantasy about a boy and his giant dragon friend. Filmed in New Zealand and starring Bryce Dallas Howard, Robert Redford and Karl Urban.

For years, old wood carver Mr. Meacham (Redford) has delighted local kids with his tales of the fierce dragon that resides deep in the woods of the Pacific Northwest. To his daughter, Grace (Howard), who works as a forest ranger, these stories are little more than tall tales…until she meets Pete (Oakes Fegley). Pete is a mysterious 10-year-old with no family and no home who claims to live in the woods with a giant, green dragon named Elliott. And from Pete’s descriptions, Elliott seems remarkably similar to the dragon from Mr. Meacham’s stories. With the help of Natalie (Oona Laurence), an 11-year-old girl whose father Jack (Wes Bentley) owns the local timber mill, Grace sets out to determine where Pete came from, where he belongs, and the truth about this dragon.

Smart and simple aren’t qualities often seen in the same film, much less those aimed squarely at kids such as Pete’s Dragon. Director David Lowery’s Disney remake is a rare delight in how it respects the intelligence of its audience while still offering up lump-in-the-throat emotional beats in service of a welcomely straightforward story.

One of the year's most delightful moviegoing surprises, a quality family film that rewards young people's imaginations and reminds us of a time when the term "Disney movie" meant something...

All the nostalgic Spielberg-y-ness of 'Stranger Things', minus the creepy kids with paranormal nosebleeds.

It is slightly unfair to say that this reboot of "Pete's Dragon" is middling on a larger scale, but it's not entirely inaccurate either.

This is a new classic. Like E.T., it'll be watched and loved for many years to come.

Manages to be sentimental, genuine, and magical all at once.

A cinematic enchantment, a low-key 1970s-style kids' movie brimming with sincerity and heart. It's one of the best films of the year.

Experiencing "Pete's Dragon" is like seeing something thought to be extinct, a creation every bit as magical and mythical as the flying, fire-breathing beast it's named after. That would be the straight ahead, unapologetic family film.

...the notably darker interpretation turns out to be, like the CG creature itself, a moody, lumbering thing that seldom takes flight.