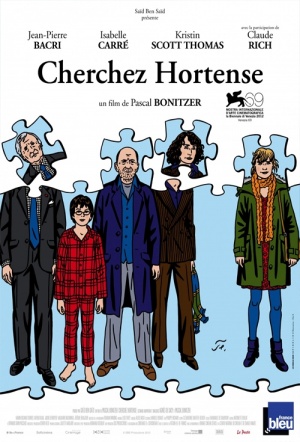 Kristin Scott Thomas stars in this French comedy as a wife who puts pressure on her husband to perform a straightforward task: solicit work papers from his state councillor father. However, the old man and the son despise each other....

"Damien (Jean-Pierre Bacri) is a professor of Chinese civilisation who lives with his wife, Iva (Scott Thomas), a theater director, and their son Noé (Marin Orcand Tourrès). Their love is mired in a mountain of routine and disenchantment. To help keep young Aurore (Isabelle Carré) from getting deported, Iva gets Damien to promise he’ll go to his father, a state department official, for help. But Damien and his father have a distant and cool relationship. And this mission is a risky business which will send Damien spiraling downward and over the edge." (Venice Film Festival)

This well-acted feature lacks the emotional and thematic density of Techine’s best work.

Light-weight French comedy drives down the middle of the road without energy and invention.