Kubo and the Two Strings 3D 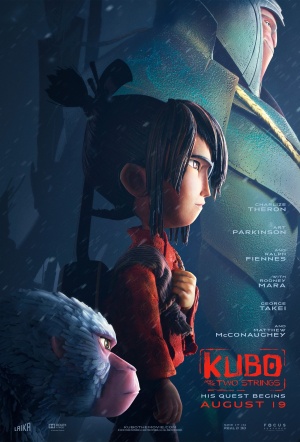 Clever, kindhearted Kubo (Art Parkinson, Game of Thrones) ekes out a humble living, telling stories to the people of his seaside town including Hosato (George Takei), Akihiro (Cary-Hiroyuki Tagawa), and Kameyo (Vaccaro). But his relatively quiet existence is shattered when he accidentally summons a spirit from his past which storms down from the heavens to enforce an age-old vendetta.

Now on the run, Kubo joins forces with Monkey (Theron) and Beetle (McConaughey), and sets out on a thrilling quest to save his family and solve the mystery of his fallen father, the greatest samurai warrior the world has ever known. With the help of his shamisen – a magical musical instrument – Kubo must battle gods and monsters, including the vengeful Moon King (Fiennes) and the evil twin Sisters (Mara), to unlock the secret of his legacy, reunite his family, and fulfill his heroic destiny.

Despite the occasionally laboured writing (with attempts at humour that are dry and distancing), Kubo and the Two Strings is swoonworthy in its vibrant visuals that span across unruly seas, lush landscapes and vivid seasonal colors.

Knight has put together a picture that hits a lot of all-ages-entertainment sweet spots while avoiding hackneyed conventions, and ends up delivering what feels like a sincere family-friendly message.

I'm not inclined to give a pass to a family film that indoctrinates an irrational belief system just because it's novel.

Both Theron and McConaughey are excellent and, along with Game of Thrones' Art Parkinson, who voices Kubo, they're an endearing trio.

Yet another success for stop-motion giants Laika, Kubo boasts big laughs and effective scares in a typically gorgeous animated tale.