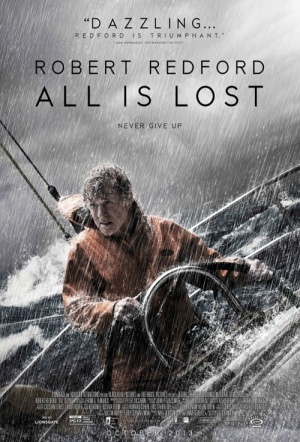 Robert Redford stars by himself as a man lost at sea in this nearly dialogue-free thriller. Despite his resourcefulness, the aged sailor is forced to deal with the possibility that these may be his last moments alive. This is the second feature by writer and director J. C. Chandor, who impressed critics with his Oscar-nominated debut Margin Call.

Deep into a solo voyage in the Indian Ocean, an unnamed man (Redford) wakes to find his 39-foot yacht taking on water after a collision with a shipping container left floating on the high seas. With his navigation equipment and radio disabled, he sails unknowingly into the path of a violent storm. Using only a sextant and nautical maps to chart his progress, he is forced to rely on ocean currents to carry him into a shipping lane in hopes of hailing a passing vessel. But with the sun unrelenting, sharks circling and his meager supplies dwindling, the ever-resourceful sailor soon finds himself staring his mortality in the face.

All is Lost / Reviews

On the surface, writer/director J.C. Chandor’s second film couldn’t be more different to his debut Margin Call, an excellent ensemble drama depicting the 2008 Wall Street meltdown. But look closer and you’ll see evidence of an auteur at work. Both films benefit from a brutal consistency of time and place, and both pit their protagonists against an immutable force – be it the financial crash or, in this case, the unforgiving ocean.

With no 3D, no friends and no hope, Redford and Chandor show how survivalist instincts can stoke thrilling, thoughtful cinema.

It's the salvation of the moviegoing year.

An action movie in the most profound and exalted sense of the term.

Robert Redford's near-mute performance as a mysterious old man of the sea adrift and utterly alone makes for a bold, gripping thriller.

A triumph of visual storytelling... while Redford is sublime in what could well be the performance of his career.