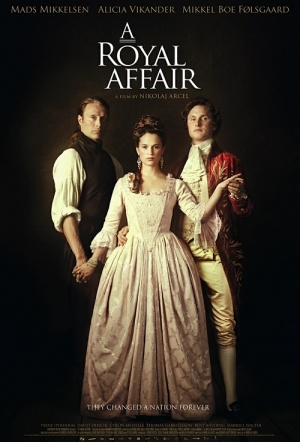 Historical, romantic-drama set in 18th Century Denmark based on the deadly love triangle between the young Queen of Denmark, her schizophrenic King and the royal physician. Stars Mads Mikkelsen (After the Wedding).

Queen Caroline Mathilde (Alicia Vikander) was an English princess who, at 15, married Denmark’s King Christian VII (Mikkel Følsgaard). German physician to the king, Johann Struensee (Mikkelsen), gained strong influence over the government by successfully treating the king and becoming the queen’s lover. For 18 months, the idealist Streunsee was the de facto head of state introducing freedom of the press and abolishing torture. But his reforming zeal, his nationality and the birth of the queen's child made him many enemies...

The Girl With The Dragon Tattoo screenwriter, Nikolaj Arcel, directs.

...[tries] but [doesn't] always succeed in balancing this epic love story with political thriller elements as they pack more than five years' worth of momentous events into slightly more than two hours.

A fascinating affair of state.

Gripping, smart, well-acted - everything you want in a period drama.

The romantic triangle is sharply drawn, with Christian seeming to re-evaluate himself as he becomes part of the power structure and not just its frivolous figurehead.

A voluptuous slice of historical drama that will satisfy period fans and Mikkelsen admirers equally.